For part two of my two part series in concerts I got free tickets to it’s 311 and the Offspring, two bands I listened to in junior high and haven’t kept up with since. The thing to know about this show is that it rained, so much so that ticketmaster called my phone to say gates would open late. They possibly made the people already inside go back to their cars? It was pretty unclear. So we weren’t in a big rush to get there. I stopped at a place and got a wrap to eat, it was much better than the stale expensive nachos at the venue (previously on entreaty.net: I eat stale nachos and watch Janet Jackson).

The first band was Gym Class Heroes. I have no idea who that is and didn’t show up in time to see them.

The second band was The Offspring. The time from the gates being opened late was apparently taken out of Gym Class Heroes set time. As we walked from the parking lot toward the venue I heard “All I Want” and “Come Out and Play” i.e. two of the few Offspring songs I was expecting to recognize. Oh well, as soon as I got into the venue, sure enough, I hear something like”now we’re going to play one from our new album.” But my bad luck turned around because an usher gave us free ticket upgrades to the seated area that was, importantly, not in the rain. If the Offspring have a lot of new material they didn’t play much of it. After a couple of new ones it was back to songs a recognized for the majority of their hour. What I consider to be the worst Offspring songs seemed to get the best reaction from the crowd, which actually had some younger people in it, unexpectedly. They sang along loudly to “Why Don’t You Get a Job” and “Pretty Fly For a White Guy,” which I successfully had blocked out of my mind and now I remember, thanks a lot ticketmaster! Did you ever want to see the guy from the Offspring play the piano and sing, because he totally did that for “Gone Away.” I would have preferred the original guitar version but I guess people who have been legally proven to have been wronged by ticketmaster can’t be choosers. They ended with “Self Esteem” and called it a night. And a drunk guy who looked about 50 fell down into my friend. 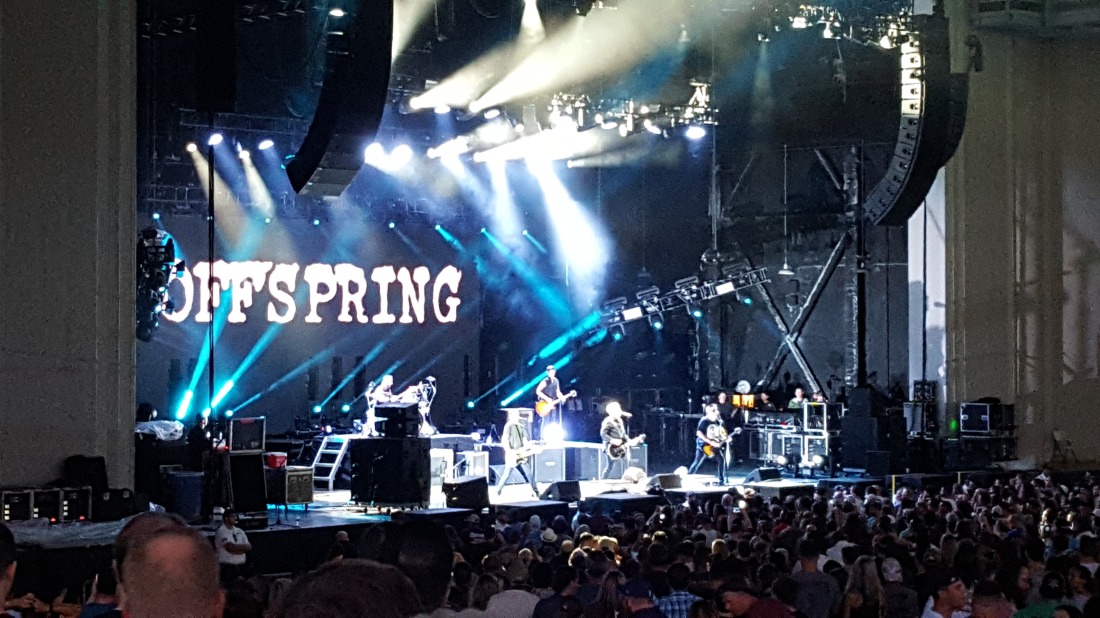 As 311 took the stage to “Come Original” and “All Mixed Up” the smell of people breaking the no smoking rules floated through the air. The crowd stayed the same size if not got bigger by the time they came out. They played a lot of material I was unfamiliar with and some I was. Remember that song “Amber?” People love that song. In case you are wondering, they did play the cover of “Love Song” which shouldn’t exist because no one is going to improve on Disintegration songs. There was also an extended drum solo which culminated in the entire band playing on their own drums. They had some cool screensaver like images behind them which I assume go well with ignoring smoking rules. I’ll be honest, I wouldn’t have gone to this if it wasn’t free but it was entertaining enough and junior high me can be happy he finally saw “Down” and “Beautiful Disaster.”

Up next part one of a one part series, shows I could have gone to for free because of the ticketmaster lawsuit but already had a ticket to: Slayer, Testament, Napalm Death, Lamb of God, and Anthrax.